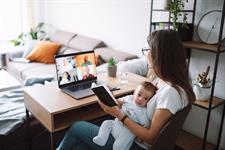 More mothers with children are in work than in any equivalent quarter in the past 20 years, while the overall level of all working-age women in employment has risen, figures from the l Office for National Statistics (ONS).

The data showed that more than three-quarters (75.6%) of mothers with dependent children were currently working, while the overall employment rate for women aged 16-64 reached 72.5%, closer to the record early 2019 rate of 72.7%.

Given that a third of working mothers also have access to special working arrangements, such as flexible or fixed-term hours – a higher level than fathers (23.6 percent) – it is clear that many employers are reinventing work to allow greater access to those with care responsibilities.

Half of working mothers’ flexible work requests are turned down, survey finds

Half of working mothers feel trapped in their jobs due to inadequate childcare, survey finds

However, Jessica Chivers, psychologist coach, author and host of the Comeback Coach podcast, explained that there is still a lot to be done to level the playing field between men and women, both at work and at home.

“If men don’t do their fair share at home, women risk burning out as they progress in their careers, or failing to progress due to the cost to family relationships and health,” he said. she declared.

Employed women spending more time on unpaid childcare and housework than employed men (85 and 167 minutes per day compared to 56 and 102 minutes per day), according to ONS data from March 2022, Chivers suggested that employers can play a central role in addressing the imbalance.

She added: “This means that employers encourage men to take shared parental leave and proactively talk to them about how they would like to change their schedule to be active at home (e.g. going to 0, 8 ETP) when they become a father.”

Other considerations, she said, could include subsidizing childcare for employees, allowing working parents access to lower hours for pro-rated pay and ensuring more career progression. fair by engaging in career conversations earlier and considering job shares for high-level positions.

Angelina Gentili, People Operations Manager at Personio, added that creating flexible work structures as well as a space for peer-to-peer learning around work-life balance can also be essential as long as it is supported by a proactive culture.

“We have a kid-centric Slack channel for parents to ask questions and share knowledge about raising a family,” she said.

“But at the end of the day, adapting attitudes within the company is the most important change. The whole of a company – especially the management – must support women with dependent children.

Similarly, Rebecca Blott, CEO of Castle Construction, said it is work cultures and not just HR policies that need to change to better support women in the workplace with flexibility and career progression.

“I’ve worked in roles where your eyes literally roll if you leave the office before a certain time of day. We need to decide as a society how important it really is to see more women on boards and in leadership positions, as this will require a radical overhaul of working attitudes and practices,” she said.

And while Blott doesn’t see the number of women working with dependents as a very good thing — she said in a cost-of-living crisis it’s a necessity for many families — she added that the well-documented skills shortage could force attitudes to flexibility to change, which can help women, mothers and parents.

She added: “I see this as a positive change because it’s better to focus on the value an individual can bring to an organization, rather than the fact that they can come in at nine and stay until five hours. »

Emily Liddle, campaigns manager at the Fawcett Society, said it was “great that there are more women in the workplace than ever before, but the growth in women’s employment has certainly not been matched by structures, policies and work environments that allow women to thrive.

“Women are more likely to work in low-paying positions, often working part-time to balance work, childcare and the demands of our busy lives and they remain paid less than their male counterparts, across the board. .

She added: “We urge all employers to take a proactive approach to creating gender-equitable workplaces that promote the talents and skills of women. It starts with recruitment, prohibiting salary backgrounds that promote gender inequality and instead basing salaries on skills and experience.

“In the workplace, offering flexible working by default helps all employees balance the pressures of work and family life, with women seeing the greatest benefit. And by creating positive work cultures, ones where men are encouraged to take parental leave, this will change expectations that caregiving is women’s work and has a significant impact on gender equality in the workforce.