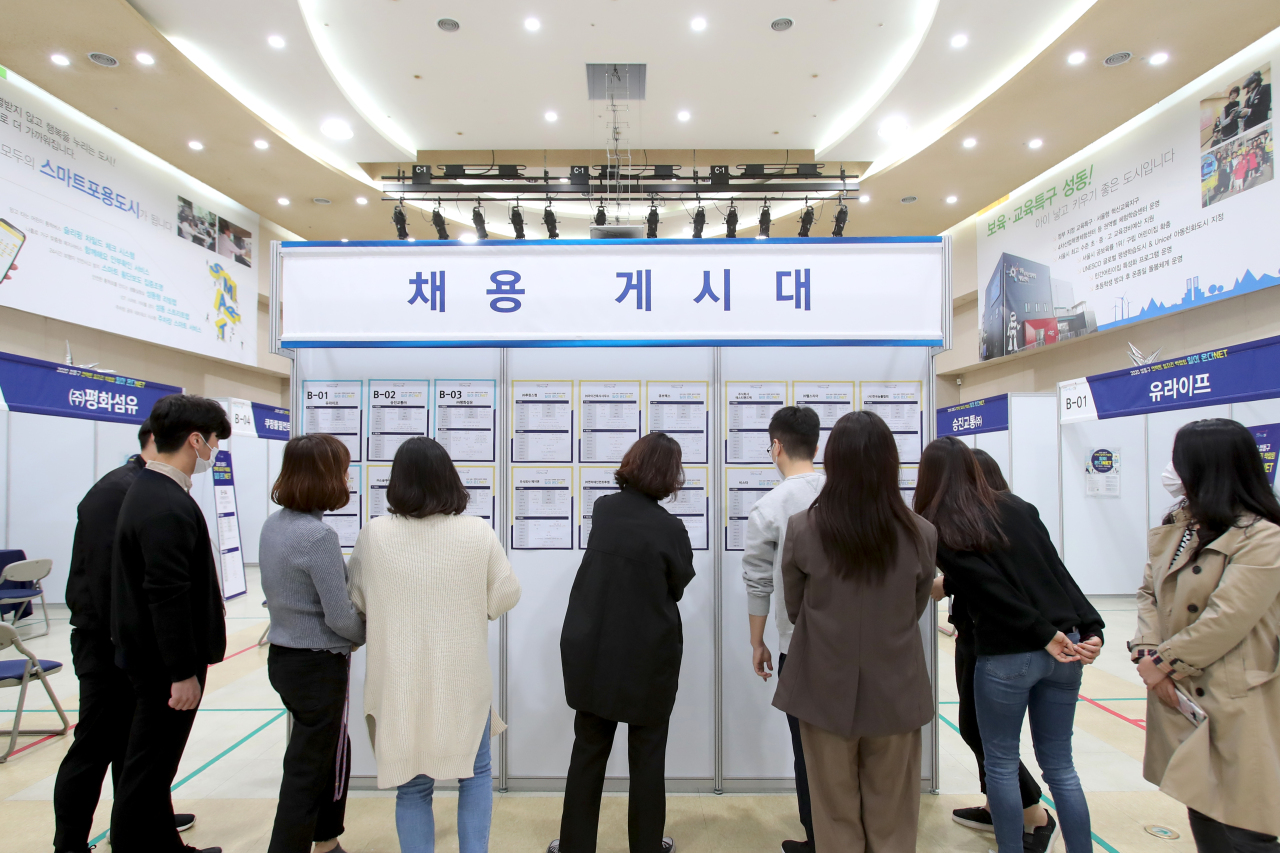 Citizens look at a bulletin board at a job fair in Seoul on October 22, in this photo provided by Seongdong-gu’s Seoul office. (Yonhap)

SEJONG – South Korea saw its employment rate drop to 60.3% in September, its lowest level in four months since reaching 60.2% in May.

People in their 30s have been hit the hardest, according to government data.

“It is not consistent that the employment rate of 30-year-olds is lower than that of 50-year-olds,” a labor research analyst said.

The 30-year-olds, having regularly exceeded or equaled the 50-year-olds in employment since the end of 2017, were overtaken by the latter in August 2020. 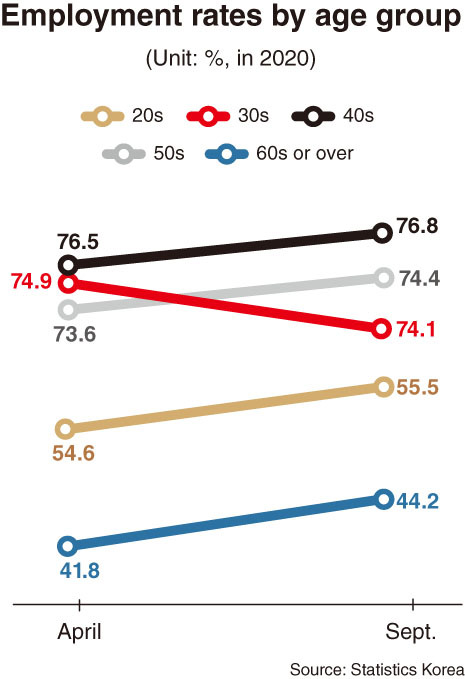 The employment rate for those in their 40s stood at 76.8% in August and September.

Those under 20 saw their employment figures improve compared to the first half of the year. The same goes for people in their twenties, forties, fifties and sixties or more.

The analyst said the deteriorating outlook for those in their 30s could be attributed to a significant drop in hiring following the novel coronavirus. â€œNonetheless, it is difficult to downplay the poor performance in creating jobs for university graduates under the administration in place since 2017,â€ he said.

According to the Korea Employment Information Service, the number of unemployment benefit recipients in their 30s stood at 124,116 in September. This was a 44.6% increase from 85,788, released a year earlier.

During the corresponding one-year period, the total monthly benefits paid to those in the age group increased from 131.6 billion won ($ 117.3 million) to 209.6 billion won.

A joint survey by Job Korea and Albamon showed that 31.4 percent of salaried workers in their 20s and 30s started their economic activities as non-regular workers.

In addition, almost half (48.5%) of high school graduates were non-regular workers when they were initially hired, meaning they were in temporary or contract jobs. More than 1 in 4 university graduates (27.9%) and college graduates (30.1%) were in the same situation.

Korean temporary workers, people in positions with predetermined termination dates, accounted for 24.4% of all salaried workers in 2019.

This figure is the fourth highest reported by the top 43 countries, according to the 37 members of the Organization for Economic Co-operation and Development. The OECD average was 11.8 percent.

Earlier this year, President Moon Jae-in pledged to create 550,000 jobs as part of a 10 trillion won plan funded by the supplementary budget.

But many online commentators criticized the plan, predicting that it would mainly create temporary public sector jobs and calling it a waste of taxpayer money.

The Moon administration, since taking office in May 2017, has spent around 50 trillion won on job creation, reflecting its election promise to create 810,000 public sector jobs and simultaneously solve the unemployment problem. young people.

Critics, however, said those efforts produced temporary jobs for people aged 60 or older in state-funded agencies, rather than increasing the number of regular jobs for younger ones.